I created this thread, to collect and debunk all the FUD and wrong information around EOS

Misinformation: EOS is controlled by block.one

Truth: block.one is “only” a community member with less than 10% of EOS tokens. They have a big weight, but can’t control EOS. Its true, that they develop the EOSIO protocol, which is used on the EOS mainnet. So one could argue, that they control EOS through the protocol development. But the protocol is opensource. If the EOS community decide to copy the protocol and develop it further in another direction, this would be possible. There are as well enough smart developers in the EOS community who could take over, if EOS token holders no more agree to the development process of block.one. This is why block.one is in regularly contact with Block Producers and EOS token holders to find consensus.

Here is a very good article about block.one and the relationship to EOS:

A thread written by @themoneyteamgh

1/ Most people misunderstand #EOS cos they misunderstand the relationship between @block_one_ #EOS & #EOSIO A thread to help Read...

Truth: This is not true. This article was only in drafts of the initial EOS Constitution and didn’t make it to the final cut. Either way, it doesn’t matter now because the EOS Constitution is obsolete and was voted out completely by the BPs.

Truth: block.one run an ICO to collect money to develop the EOSIO protocol. The website on this time was EOS.io, so it was referred often as “EOS” (for example see here: https://b1.com/news/eos-blockchain-operating-system-unveils-year-long-token-distribution/). One can clearly see that when they wrote EOS it was linked to eos.io, the protocol development and not to a public chain. The EOS mainnet was not in place at this time. After the mainnet launch the community called the mainnet “EOS”. Nobody knew how many public chains will be launched. It could have happened that there were 10 EOSIO public chains launched. This is why people often get confused, about ICO money. The ICO money was for developing EOSIO protocol and not for advertising EOS mainnet, even Brendan did promise to provide funds for the EOS ecosystem.

Provided funds or money until today (A timeframe to deploy those funds were never given and we see this process continuing) from block.one I know of:

Clifford Chance LLP supported by PwC Hong Kong and DMG Blockchain Solutions were engaged to review Block.one’s actions during the token sale conducted between June 26, 2017 and June 1, 2018. The token sale involved 900 million ERC-20 compatible tokens on the Ethereum blockchain, which were governed by a related ERC-20 smart contract. The review was completed in July 2021 and found no evidence that Block.one either intentionally purchased tokens by any means during the token sale or entered into any arrangements with third parties to do so on their behalf. This was an extremely thorough and time-consuming review confirming what we always knew to be the case. The report can be found here: https://eos.io/wp-content/uploads/2021/07/Report-on-Token-purchased-during-Block.ones-Token-Sale-22-July-2021-final.pdf

Truth Dan left block.one and not EOS! Dan is working with the EOS Community, to improve the EOS funding and governance. The Eden process is based on Dan’s study https://moreequalanimals.com (book available for free download) and is a truly democratic way to elect leaders in the EOS community which are allocating funds to EOS projects or anything what the community decides is needed for EOS. The official website is edeneos.org. Dan is funding the development of the EdenOS software which supports the process.

Misinformation: block.one is dumping their EOS and buy Bitcoin with it

In June 2018 the EOS mainnet launched and the EOS community decided to give block.one the 100 Mio EOS tokens to increase the possibility, that they will stay in the EOS community and will have a big interest in the future to help the EOS mainnet succeed. There was no strings attached to this decision. Surely we all hope, block.one has an interest now that EOS will succeed…

Still, block.one did not dump any of their 100 Mio EOS yet. You can check that here: https://bloks.io/account/b1

Misinformation: We need thousands of nodes in order to decentralize a system.

Truth: * A recent study claims that a quorum of nodes will achieve the highest degree of decentralization.*([1801.03998] Decentralization in Bitcoin and Ethereum Networks)

Check out the article from Phillip Hamnett:
https://philliphamnett.medium.com/how-the-success-of-block-one-is-linked-to-eos-3ad47f0821c

He wrote:
" Why is EOS the most censorship-resistant chain?

There are lots of different protocols to develop censorship-resistant blockchains, proof of work is the original mechanism used by Bitcoin and Ethereum. The problem with PoW is that it is possible for a country to seize and control the hardware within their country and perform a 51% attack. The mining pools that run on these chains could also agree to collaborate to perform a 51% attack. If they do this, then it does not just break Bitcoin, but all PoW chains. Because if someone creates a fork of Bitcoin, and that fork becomes popular, then the bad actor can simply switch from mining on the (now dead) Bitcoin chain to the popular fork, and they will immediately have over 51% of the mining power again. The effect is to dilute the PoW chains and make them all more susceptible to such an attack. 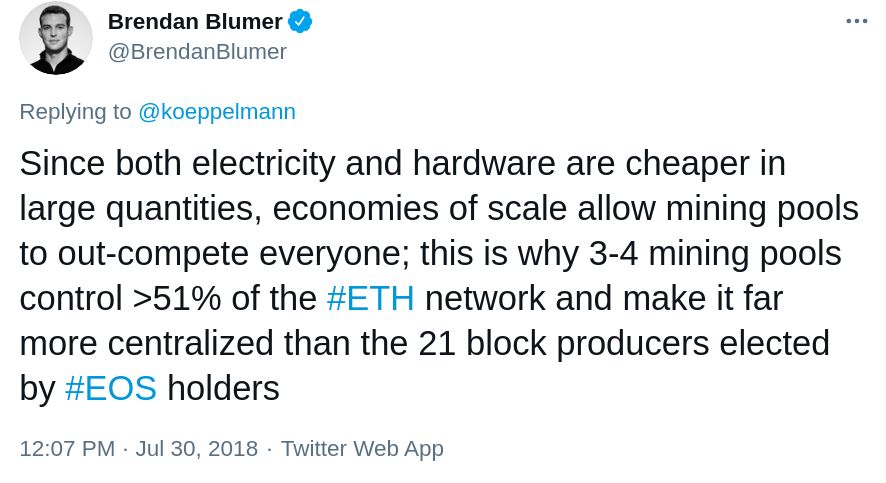 The DPOS system used by EOS however does not lend itself to such an attack, as each of the 21 node validators is selected based on the tokens held by voters within the system. These votes in practice come from a mixture of individuals who want to make positive impacts on the ecosystem by voting for high quality network validators, or by exchanges voting with funds that belong to the users of their products. For a country or bad actor to take control of the network, they have to now either buy 51% of all the tokens (which is prohibitively expensive), or they have to coerce 15 of the node validators. In both cases, a simple fork of the network would allow a new set of node validators (demonstrated from the hive community when they forked of steem) to be selected and the money they used to buy the 51% of tokens is wasted, and all efforts would have to start from scratch."

And two simple graphic shows everything: 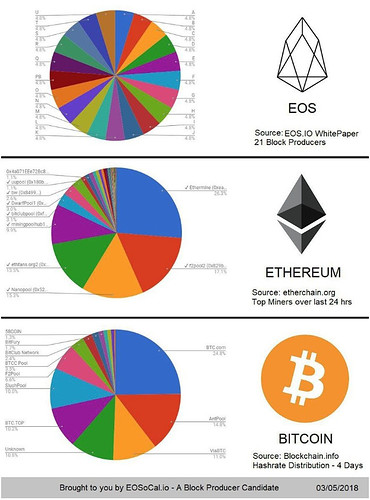 Misinformation: The Top 21 Block Producers are manipulating the voting system

Truth: No nobody manipulated the voting system. The Top 21 Block Producers changed a lot since 2017. There are “issues” on all the chains. Every chain is a plutocracy (POW and POS chains) and not a democracy. But somehow only in EOS there were massive FUD campaigns going on against EOS governance. All the chains have a kind of a pareto in place, where the chain will end up with a small amount of big parties which control the chains. Maybe EOS got that much hate, because its the only chain, that is transparent and people really can see what is happening. The good thing is, EOS is still alive after all this hate and keep thriving. Anyway EOS continue to improve their governance process and try to eliminate the pareto Princip. And with Eden edeneos.org, EOS could get a truly democratic governance process (political playoffs > moreequalanimals.com). The elected leaders from a bottom-up approach will get budgets to fund EOS projects. If the process is successful, it will be put fully on chain and maybe as well put in place to elect Block Producers. But first the process have to proof that it works for funding… Everything else, the EOS community did not discuss how the process could be used for good further than funding… Surely there is a lot of new hope, excitement and a new hype building up…

Misinformation: EOS is not a blockchain and does not even use Merkle trees.

Truth: * EOS uses Merkle trees just like any other blockchain. EOS does have a merkle tree over all the transactions within a block. Additionally EOS maintains a merkle tree over all of the blocks. This means it is possible to prove you have been paid without having to process all blocks nor trust the full nodes. These proofs are smaller than ETH because light nodes don’t even require the full history of block headers. That is a design choice that makes EOS so fast! Superior technology all the way. Don’t let the misinformation campaign get to you. Keep in mind everyone has an agenda…

*This information has been copied from the eosbasecamp.com website, which no longer exists. Thanks to the author / Edit 5. April 2021: read, felt for good and a small addition by Dan Larimer

Misinformation: The EOS network got congested

Truth: The network never was congested. What happened is that the price of transaction was rising that much, because of inefficient resource allocation, that the users were unable to transact, because the transactions got too expensive. If one would have paid for it, it still would have been possible to transact. With the new resource model “Power Up” in place and all the advancements and upgrades the Block Producers have made, EOS is now ready for prime time! The BP’s are able to handle anything you throw at them!

Misinformation: EOS is a ghost/dead chain and nobody is developing on EOS

Truth: There are several projects developing on EOS (check here: https://forums.eoscommunity.org/t/eos-wallet-overview/1299/3) and the most important improvements in the last year for EOS itself was:

Truth: They are not free, someone is always covering those costs through one or more of the systems EOS provides. Every transaction has a variable “resource cost” (depending on the transaction) represented as CPU and NET. Accounts have a balance of these resources which is depleted as transactions are performed.

These resources can be obtained or provided in a number of ways:

Users who stake their EOS can earn enough EOS to rent the resources they need. This means your EOS balance can remain stable or grow as you use the network if you have sufficient staked EOS. That said, capital costs is just another kind of fee unless you wanted to hold the EOS anyway.

All of that said, EOS does have the lowest fees around.

I would include the phrase “feeless instead of free” somewhere in the debunk.

Thank you for making this info easy to find!!