The Chief Delegates from the second trial mock Eden election had our eighth team meeting this week. In our continued efforts of transparency you will find below the notes from this meeting as well as a link to the unedited video capture for your review.

We are continuing our Eden Office hours which run Monday - Thursday from13:00 15:00 UTC however these are going to be re-branded to Eden Induction Hours to help facilitate new Eden member on-boarding.

The general tone of these calls remains the same as almost being similar to an office water cool chat. These can be working background noise or you can jump in an ask questions about Eden or the various projects that are on the go. This Zoom link is the same for each daily call.

We are continuing with our review of More Equal Animals in the form of a weekly live-stream series at 13:00 UTC each Friday. The goal of these discussions will be to output a condensed summary or TLDR of the ideas from the book so they can be more easily shared. Please keep an eye out for the live-stream link and join us to ask any questions you may have and join in on the conversation.

We discussed during our meeting a recent Telegram comment about Eden where the individual stated that it was disorganized and has added zero value to the EOS ecosystem. The point was raised not so we could dispute this person’s opinion, but instead how can we improve our messaging and strategy to help positively influence opinions similar to this.

The discussion yielded the following points:

Eden on EOS Holacracy Framework:
For reference to our Eden on EOS framework initiative, organizing ourselves more effectively, please see the documents below:

Shortened framework with the specific roles listed for easy view.

The full unedited video from this meeting can be found here: 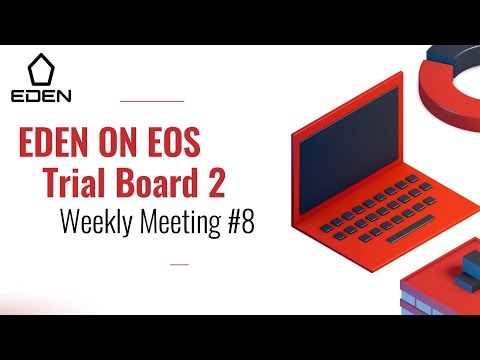 The following remains as our Chief Delegate Trial 2 mission statement:

Develop an Eden on EOS organizational structure that is scalable, iterative, transparent, & collaborative with the entire EOS community.

Review Progress on our Individual Mandates:

Ami:
• Project is almost ready. A day or so until the Chief Delegates can test it on the Jungle testnet.
• Its not polished but works to create an account with a WebAuthN key. You also enter your other trusted party or msig that is used to create the account for you.
• Ami will demonstrate when it’s ready to explain.
• A Telegram group will be created for this project.
• In order to make an EOS account with EOS in a Box you need 3 things, 1. you need to type a account name that is available, 2. is to use your finger or face id for a key pair. The private key stays on the phone, the public key will be displayed on the screen, 3. is the EOS account of your trusted friend.
• Once these three pieces of info are entered, a link is sent to the trusted friend, who then uses their Anchor wallet to create the account.
• The trusted friend is the one who has the owner key and can help you if your phone breaks for example.
• Ami feels there still will be a lot of work to do with this project around the soft decision making around how we can make this system work at scale by saying having a design issue that might lead to improper use of this set up.
• We could add time-delays or other trusted groups to assist with security via multisig (IE EOS Support)
• With this support option there is a thought where members could do something similar to the Eden induction process with a video recording on IPFS that can be used to verify when the time comes that the person requesting a key change is indeed the person who initially opened the account. These softer decisions can’t be resolved with code.
• This will be a version 0 of EOS in a Box, with future opportunities to add to and improve upon the work that Ami is doing.

Felix:
• Was in LA recently and met up with the guy responsible (Airack (sp)) for the Creator Now platform that Felix is a part of.
• Felix spoke one on with with Airack and set him up with an EOS account so Felix could pay for his Season Three membership with EOS. That interaction was recorded and will be used to create content around this. It was clear that EOS was far faster compared to a BTC transaction.
• Felix is still considering doing an Eden style election but still needs to consider how to approach that.
• There is an opportunity to make Felix’s first season 3 video about this transaction between Airack and himself in EOS, which could then provide more visibility for EOS in this community (who would likely watch a vid with Airack in it) which could then lead to more openness to an Eden style election with an EOS prize.

Josh:
• EOS User Support Service, is almost ready to be shown to the community via the new web site that as an MVP.
• Hopeful that by the next meeting this will be live, with the goal of actually getting it up and working in advance of the first official election on Oct 9.
• EOS Bees and EOS Support are finding a lot of overlap between the two initiatives. EOS Bees being more outreach, fud fighting, while EOS Support is about user on-boarding and existing user support.
• Its worth noting those involved with EOS Support are also involved with EOS Bees. This fits nicely into the holacracy CMO circle.

Chris:
• CrytpLions interview was released last week.
• Eden Proxy will be launched this coming week.
• Will create both proxy accounts this week.
• By end of week, the web site will be launched with both rewards and donation proxy options listed.
• EOS Costa Rica that developed the eosrate.io tool made a quick adjustment to allow for Eden member EOS accounts to not need to vote for or proxy any tokens. This because some Eden member accounts are just shell accounts for Eden and don’t hold the members EOS bag. So with this they may not vote or proxy with there Eden EOS account.
• Still encouraging Eden members to rate BPs on that tool.
• Will create a how-to video on pulling tokens from an exchange, staking to rex, and voting for a proxy. As well as a video on how to use eosrate.io
• Will scale the weight of Eden members rankings of BPs by their participation and success in the most recent Eden election.
• Will update the rankings for the proxy monthly, so around Sept 10 and then again after the next election on Oct 9.
• The weighting will be done manually in Excel and posted on the website for anyone to review.