I have used anchor wallet on chrome browser for a long time without issue. But now when I try to click the anchor wallet tab on defibox nothing happens. It’s like the defibox page doesn’t recognise my wallet. I’ve reloaded wallet and page and still nothing. Then I tried the Safari browser instead and was able to log in to defibox with no issue.
I’m thinking the problem maybe a chrome settings issue but really not sure.
Does anyone have any idea what might be the issue with logging into defibox?

P.S My wallet is latest release and I also have no problem logging into other sites on chrome with anchor wallet.

Maybe it’s a browser plugin that’s preventing the requests? We’ve seen some adblockers and other privacy related extensions interfere with how the two apps talk to each other. Try disabling those on defibox and see if it potentially starts working.

hello, I recently uploaded the anchor wallet to my android mobile phone! But for some reason I can’t use it to the fullest! when authorizing on different decentralized sites, I cannot change the login status from Owner to active in the application! when I log in, I see that I am trying to log in as an owner and initially I know that the system will refuse to log in because it is unsafe! But in the wallet function there is no such option that would warn a new user about this danger and would offer the opportunity to eliminate an unsafe entry to a particular site through the owner key! I tried to configure this feature on a desktop wallet, but I don’t know to what extent these features are synced with a mobile wallet! what can you advise me in this case ?! I tried to log into the EDEN OS site today and ran into the same problem on the desktop version of the wallet!

d the anchor wallet to my android mobile phone! But for some reason I can’t use it to the fullest! when authorizing on different decentralized sites, I

It sounds like you may be using the same private key for both your owner and active permissions. If that is the case and if you only want to use the active permission on anchor android then delete your account and reimport it. Select the account that ends with “@active” when importing your private key. After that you will be able to login using your active permission.

The above is also true for the desktop version.

If you don’t want to use your owner permission, I’d recommend not importing it in the first place.

I have a question about why it is impossible to synchronize a mobile wallet with the desktop version where, thank God, everything works fine for me, how is it done on metamask using the qr code ?! when all blockchains with all accompanying parameters are automatically added to the wallet ?! I cannot add the ux network blockchain private key. In the EOS blockchain, having different public and owner keys, I mean that they are not the same, but when using a mobile application for authorization on any platforms, I scan the qr code and the system just thinks, or, more correctly, freezing and does not open any application! I’ll just say that. I am familiar with all types of wallets on all blockchains, I have been in crypto since 2012, and for this you don’t just need to write standard answers!

I am not sure I understand what you’re asking. So here’s a few bits of information, and you’re free to ask additional questions which I’ll be happy to answer.

A few questions for you about the “freezing”:

I want to ask a simple question! Can I connect my desktop anchor wallet to a website or app without a mobile phone without scanning a QR code ?!

raduev404, [18.08.21 21:07]
If not, then imagine that I cannot connect to daps anywhere because scatter is almost never accepted due to the lack of updates and I cannot use anchor without a mobile application, since the android version is still in test mode!

Yeah - you can use desktop or mobile from the same interface. It’s your choice, scan the QR with Anchor on a mobile device or click the button below the QR code to launch Anchor on your current device.

raduev404, [18.08.21 21:20]
I have your wallet from the very beginning and I haven’t been able to enter any daps from my desktop wallet yet! This button is not clickable for me!

I made a video that it doesn’t work. Please help me! 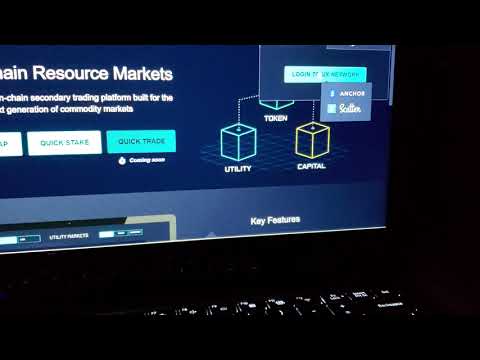 It looks like your web browser is preventing that link from working, are you using Brave?

Brave, in their most recent version, has a bug that prevents links like Anchor uses from working. I’d recommend trying a different browser to see if that works, and if it does, then we will just have to wait until the Brave development team fixes this issue.

hello Aaron! No, I’m using chrome, today I installed the update to 1.2.7 but the problem persists! Help me please !!! I need to enter the UX NETWORK accent in order to stake some of my ux tokens in order to get an air drop of new projects!

Chrome as far as I know should work fine by itself - but there are plenty of other things that might prevent Chrome from working properly. Have you tried another browser? It’s possible that a Chrome browser extension may also be causing issues.

Hello! I checked my public key and owner key and they are the same! I have a question about how to replace one of these keys ?! I found functions for creating new key pairs in your wallet, I created them, but what to do with them and how to replace them by removing the old ones and why the private keys were generated and I did not quite understand! Is there a video instruction on how to do it right ?! thank you in advance!

I found functions for creating new key pairs in your wallet, I created them, but what to do with them and how to replace them by removing the old ones and why the private keys were generated and I did not quite understand!

Generated keys don’t do anything on their own and can be used in a number of different ways. The act of generating them alone is just a utility Anchor provides for when you need new keys.

If you want to replace the current keys on an account with new keys (thus changing which keys control the account), you could use them in the “Permissions” section found under “Tools”. This tool lets you update the keys that control the loaded account.

Be cautious when doing so, since changing the keys on an account is irreversible and if done wrong could potentially cause you to lose control of the account. We are working on some processes to make this all easier and will hopefully have these features deployed soon.

One thing to note - after you change the keys on an account, Anchor doesn’t automatically recognize the new keys. You’ll have to remove and re-add the account using the new keys you setup.

I’m not sure if there’s any videos on this topic. If there are, they’d be done by the community and might be findable via a google search.