The term of the second Eden trail election will officially come to an end with the coming first official Eden election taking place on October 9th. This election is looking to be quite exciting with currently 145 registered participants and an anticipated monthly distribution of 13,175 EOS to be split among the selected delegates.

In addition to the work outlined below we also wanted to point out a couple other general accomplishments from this team since the July 17, 2021 trail 2 election:

Comments on the extra mission statement of:
Develop an Eden on EOS organizational structure that is scalable, iterative, transparent, & collaborative with the entire EOS community.

The Holacracy has been established. It is mean to be flat with open roles, that can be filled from election to election dependent and the results of each or individual changes in support over time.

The core framework has been set up. We also set up a series of Slack channels to focus this effort. We’ve had minimal engagement in total with these channels, but considering the volunteer nature of all of this, this isn’t a surprise.

We will see how this next election plays out and will leave it up to the next set of chief delegates to decide if they want to continue with attempting to utilize this framework to coordinate the various projects and individuals receiving funding that may have overlapping scope.

The full unedited video from this meeting can be viewed here: 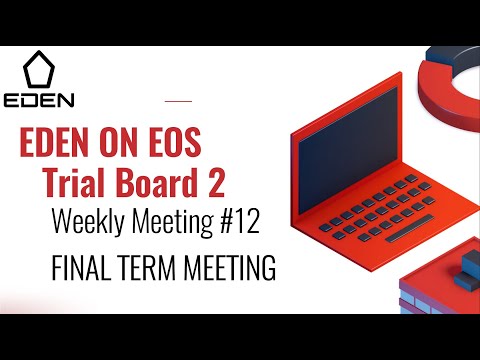 A summary from each current trial 2 chief delegate is listed below along with a few other updates from those who won 10 EOS from this past trial 2 election.

Chris:
What was Promised:
- Set up Eden Member’s Approved Proxy that picks BPs based on the subjective views of the community.
- Put up a website as a central location for the operation of this proxy.

What was Delivered:
- Edenproxy.org website is up and running. It explains the proxy(s), provides a few links to research and learn about BPs, lists all the BP video interviews I’ve done, and finally shows the BPs being currently being voted for and how they are being calculated from the eosrate.io tool.

How Were Funds Spent:
- 100 EOS to EOS Costa Rica for building, and improving upon (adding an Eden members rate filter) the eosrate.io tool
- 10 EOS to start two proxies. A Donation of rewards and Rewards proxy. These are 5 EOS each.
- I used $25 of my own funds to purchase the URL and open the two proxy EOS accounts

Deviations From the Full Pitch:
- No funds were generated from the donation proxy to use toward gamification with NFTs to incentivize proxy participation.
- John Heeter’s BP metric tool wasn’t followed up on for simplicity for now since the BPs are being selected 100% from the subjective views of Eden members vs a hybrid of subjective and objective metrics.

Ami:
What was Promised:
- EOS-in-a-Box, a Progressive-Web-App, PWA for mobile phones, which you go to by clicking a web url and can later install as an app on the phone.
- A minimal viable project which leverages webauthn - a hardware security module key management system using the user’s fingerprints or face ID to sign transactions.
- I limited the promise to a minimal wallet able to create such key pairs and sign EOS transfers to other accounts on the EOS chain.

What was Delivered:
- The above was delivered + open source code with permissive MIT license

How Were Funds Spent:
- Ami was paid 1000 EOS and will use the rest to continue developing the app.
- Edgar from EOS Costa Rica has accepted 100 EOS to review the code.

Deviations From the Full Pitch:
- I underestimated the effort needed to reach the initial milestone. Will use the funds at a larger ratio to pay myself and continue work on the app.
- Planning to add ESR - EOSIO Signing Request message standard both for incoming and outgoing messages to other wallets and apps for better integration.
- Many “soft” decisions are still in early discussions, multisig and time delays for different scenarios of people needing to replace their Active key with the help of the custodian which optimally should be a general multisig with a threshold allowing resilience, and not just one trusted friend.

Felix:
What was Promised:
- Sponsor creators on Creator Now to make videos using EOS as a form of payment. The overall goal of getting EOS into the hands of new users while bringing on more content creators to EOS.

What was Delivered:
- Created YouTube content surrounding the proposal used in my pitch for the creators on Creator Now.
- Created How to Create an EOS account YouTube Video with Eden on EOS exposure in the video. (Belief is that when EOS takes off the video will be a widely searched by new users looking to create an EOS account)
- Traveled to Los Angeles and paid Airrack (YouTuber with 2.33M subscribers) with EOS for his Creator Now program. Captured and created content surrounding the experience and conversation with Airrack.
- Created a Welcome to Eden OS hype video.
- Sponsored a creator, Jonathan Sippel from Creator Now, to join the Eden community in time to qualify for the 200 EOS matching from the EOS Foundation. Plans to pay an additional amount of EOS upon completion of content created by Jonathan Sippel for Eden.

How Were Funds Spent:
- A total of 50 EOS has left my account felix.gm.
- 40 spent on August 22, 2021 to Airrack.
- 10 spent on Jonathan Sippel’s sponsorship.
- The remaining 60 of the 110 EOS will be used for further marketing and sponsorship efforts. Will continue to be transparent on how funds are handled and spent after my term expires upon the new term of the first official Eden election.

Deviations From the Full Pitch:
- An obstacle and realization I ran into with trying to sponsor other creators was the unfamiliarity and uncertainty around cryptocurrencies in general. Many creators were hesitant to make content around a cryptocurrency sponsorship in fear of impacting their channel.
- Deviations from the full pitch has changed from sponsoring smaller creators from Creator Now community to using funds for marketing efforts via future content on my channel and sponsorships to those I believe will provide meaningful impact towards the Eden and EOS communities.

Additional Note:
- For full transparency I would like to add that I received additional donations through the support of my pitch from Mark Scheer and Randall Roland, each matching 110 EOS from the election. As well as receiving 64 EOS from Domenic Thomas from his pledge to donate upon the sortition winner, Ami Heines, choice. I also received 1 EOS from an unidentified user.
- These funds will be used for support of future content as well as supporting the marketing initiative of getting EOS into the hands of new users.
- All transactions that leave my account felix.gm will continue to be publicly announced for full transparency.

Josh:
What was Promised:
- Begin to establish an official EOS User Support Service led by Randall Rolland along with Dario Cesaro (aka Drill Sergeant Zeus) that is staffed exclusively by Eden Members who provide a minimum viable service which includes live chat, telegram bot, scheduled appointments, and helpful articles that are initially available in English with the intention to quickly expand the live chat and articles into multiple languages.
- Throughout the 2nd trial election I mentioned that if I was the sortition winner (which I was not) that I’d contribute funding to Greymass to advise on and develop parts of an EOS User Management System. I also pledged to support the Eden Proxy led by Chris Barnes as well as reach out to other Eden Members to learn more about their projects and be prepared to potentially help represent them in future elections.

What was Delivered:
- Minimum viable version of EOS Support is ready to deploy this week and begin providing its services to the community regardless of the October 9th election outcome, which hopefully includes:
- An official live chat widget embedded on several EOS community websites,
- An official Telegram Bot,
- The ability to easily schedule appointments (and even Eden Member Inductions) with EOS Support Representatives,
- The beginnings of a Learning Center with helpful articles and content available initially in English,
- Plus other Eden Members waiting in the wings to become multi-lingual Support Agents and/or help with content creation and translation.
- As well as progression on the EOS Support roadmap that is beyond the scope of the minimum viable service delivery.
- Note: Many thanks to Randall, Dario, and the other Eden Members involved!
- Additionally, I was able to help Chris get started with the EdenProxy.org site.

How Were Funds Spent:
- 110 EOS was sent from jseymour.gm to support.gm as symbolic donation to EOS Support.
- EOS Support has been established as a nonprofit based in the USA. Nearly $6,000 USD has been invested by Randall Roland and well over 1,000 hours of time and effort have been contributed by various Eden Members as well as independent contractors and service providers.
- The current monthly expenses projected for October 2021 may be at least $10,000 USD.

Deviations From the Full Pitch:
- I was not able to donate funds to Greymass in relation to developing a complete User Management System for EOS.
- I have not yet touched base again with at least one Eden Member that I intended to as a due diligence follow up to the 2nd trial election.
- Also, it seems that Ami’s EOS In A Box solution may be useful for the EOS Support platform that Randall has designed into the roadmap.

The recipients of 10 EOS who are Eden members provided the following comments:
Mark Stair: tipit is adding nft support. It will be the easiest way to create and distribute NFTs directly from your social accounts.

Vlad: As promised, wrote an article introducing Eden and made a contest on Twitter. 10 EOS went to the winner.

Douglas Bunter: has started up a Github meta repo for EOS submissions (I added this comment for Douglas because I was aware of his efforts here).

Hernan from EOSTARTER: The 10 EOS Received from Eden where spent supporting a community member in need: Andres Palmar. He needed to raise money to visit her sick mother in Mexico. The purchase of his Air Musical NFT was done on September 13th: AtomicHub - Create, sell or collect digital items secured with blockchain.
Luckily, Andres managed to buy his ticket thanks to the support of the community: https://twitter.com/andresmandolin/status/1441967648984739842?s=20

Eden members who have yet to provide an update are:
@Khaleesiwang @ToddSchlosser

Keep up the great work gentlemen!